If you follow me on twitter, you may have noticed my frequent tweets about a recently opened local* café, La Petite Robe Rose. Most tweets are accompanied by mouthwatering photos of food and drink. Here’s a sample of the treats laid on at their opening day earlier this month:

And this was my first sample – a delicious chocolat. Molten chocolate in a bowl. Heaven. 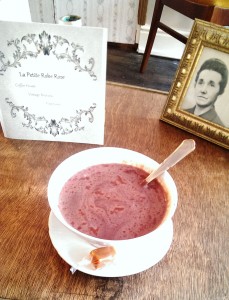 The café, which is done up to look like a 50s French living room, is run by Damien, who had the vision for it in July this year. Supported by his Aunt Catherine, he went ahead and bought the space, gave it the 50s style makeover and secured a vintage clothing supplier (yep, it sells vintage clothing too) and it opened in September. Take a moment to let that sink in. It went from a vision to reality in just three months. I know. Damien also bakes all the homemade cakes on offer in the cafe. Every day. 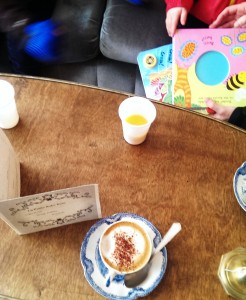 The coffee is divine (and I don’t usually drink coffee) and the salted caramel that comes on the side is dangerously more-ish so I’ve yet to buy a whole bag (but I will!). If I get the opportunity to stop by without Mushroom, I also attempt a little French conversation with Damien (I need to practise!). So, when I saw that Catherine was starting a ‘French club’ for pre-school aged children I was interested. She explained that it was just stories, songs and games rather than a ‘teaching’ approach. As I’m a firm believer that the best way to learn a language is to immersive yourself in it and have fun, I thought we’d go along to the first one to try it out.

Catherine was great with Mushroom, who initially laughed hysterically any time she spoke to him! At first, he didn’t speak at all but apparently that’s common. He got involved with the singing (well, the actions) and especially liked reading about Spot the dog in French. The second time we went along he even said a few words! The main thing though, is that he had fun. If he doesn’t start speaking French, that’s ok but if he does (and to be honest I’d be surprised if he didn’t) he won’t even be aware that he was learning as he enjoys himself so much!

My only reservation about this class is not actually about the class… The first time we went, Mushroom shared some cake with me. The second time, he asked for cake… You can see a pattern forming here. I can’t blame him, Damien’s cakes are hard to resist! If you’re local,* interested in learning French (you will learn along with you child if you don’t speak any already!) and available Thursday mornings, maybe I’ll see you there?

Disclosure: I have not been paid for this post, I simply love the cafe and was impressed with the French club so wanted to share. If Damien offers me a complimentary slice of cake though, I won’t refuse! 😉

*Even if you’re not local, it’s worth the journey – trust me.