The Bully and the Shrimp | A Parragon book buddies review

Mushroom and I received our second book from Parragon Books last week. We’ve only been Book Buddies for a month but Mushroom is already aware of what the big white envelope means. It arrived while he was at nursery and I showed him when he got home. “That’s my book Mummy.” He knew without me having to tell him!

So, after dinner he opened his new book very carefully.

The excitement of a new book!

‘Reading’ the back page

The Bully and the Shrimp 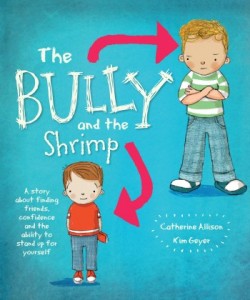 The book tells the story of small-for-his-age Noah Shrimpton, who is picked on by the class bully after moving to a new school. He has no friends to support him and is afraid to tell anyone what’s happening. Through both the storytelling and Noah’s doodles in his journal, which is beautifully illustrated, we follow Noah as he makes new friends and gains the confidence to stand up for himself. Developed in conjunction with school teachers and child development experts, this book is aimed at school-aged children and their parents and is an excellent way to raise the subject of bullying and how to deal with it, to young children.

This couldn’t have come at a better time for us. While Mushroom is not being bullied at nursery, he is a sensitive soul and spends a lot of time with some of the more confident kids. This is good for him I think, as he comes out of his shell when he’s with them but he is also easily hurt. He recently had a big argument with one of his closest friends and it really upset him. I couldn’t understand what the argument was about but it was clear there had been some shouting and name calling. Mushroom told me “It made me feel poorly in my tummy Mummy” and that he didn’t say anything himself while being shouted at. The argument can’t have lasted more than two minutes but it affected Mushroom for about a week.

After reading Noah’s story, I asked Mushroom what he would do if someone was mean to him, even if it was a friend. He told me “I will say NO!” and smiled. We did talk about telling a grown-up too – either a keyworker at nursery or Mummy or Daddy at home – but I particularly liked that the children in the book were able to resolve the situation for themselves without adult intervention. I will definitely be going back to this story with Mushroom, to reinforce the message and hope that it encourages him to stand up for himself a bit more.