Last month, Mushroom and I were out with our friends at Stratford Circus, one of our favourite family friendly venues in East London. We had been umming and ahhing for a while about whether to buy tickets for some of the children’s theatre productions this weekend. We finally decided that Tea Dance for Little People‘s ‘Pyjama party,’ sounded like fun and headed to the box office only to find out it was sold out! This made us want to go even more but I didn’t think it could happen and we started to look at other options.

A few days later, my friend called and explained that another date had been added to the calendar and she had bought us the last family ticket! I was so excited I told Mushroom straight away and every day he asked me ‘Is it my party today? Pyjamas on?’ And pouted when I said no. When the day finally came we both couldn’t stop talking about it and as we headed to the bus stop to meet up with our friends, I started to wonder if I’d got us so excited that we might end up being disappointed.

I needn’t have worried. We arrived, to a cafe full of little people in the cutest selection of pyjamas, all brimming over with excitement as what was to come. We queued nicely at the door with our tickets… 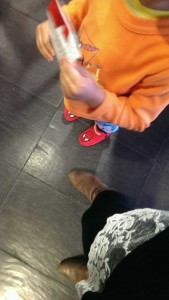 Then Mushroom was so overwhelmed by the sensory explosion as we walked in he had to run out again for a few minutes to compose himself! Once he’d calmed down, we explored the activities laid out for the free play session before the show.

We don’t do this at home!

Then, the show started! There were grown-ups in pyjamas in the daytime (Mushroom recognised some from his music club so was especially excited about this), singing, dancing and doing “gynastic Mummy!” on the giant bed. Mushroom and his friend were so excited they either stood mesmorised by the performance or enthusiastically joined in (although his friend was better at following the instructions than Mushroom, at least he tried!).

Everyone piles on the bed!

Towards the end, small containers of popcorn were provided for the ‘midnight feast,’ which were eaten while watching a film, “The Red Balloon (Le Ballon Rouge).” We had ordered fruit and yogurt for the kids as we figured they would need a little more sustenance than popcorn after all that jumping around. Pasta was available too, but just as well we didn’t order that as although Mushroom was hungry, he did not sit down to eat! He loves balloons so got very excited about the film, and even more so when he realised the sponge filled bath was now filled with red balloons!

At the end of the day, we were allowed to take a balloon home (I think we lingered a little too long!) and Mushroom made sure everyone on the bus home knew it was his ‘special balloon!’ Once we got home the tiredness started to kick in and that night, although he didn’t go down easily at bedtime (he rarely does), he slept through until 7am. Unheard of!

If you’ve been thinking about taking your kids to the theatre but are not sure whether they might be a bit young, these interactive performances are a great way to introduce them to the arts and Mushroom and I highly recommend them. You can find out more about upcoming performances for children at Stratford Circus here.

Disclosure: This is not a paid review and we paid for our tickets to this show, we just love Stratford Circus and Tea Dance for Little People, and enjoyed the Pyjama Party so much we wanted to share! Read my full PR and disclosure policy here.