Ok I cheated a little with this title. So it’s not free. It is very cheap though. In fact, it will cost you less than the price of a bunch of bananas…

It is, however, free from wheat, dairy, sugar and gluten. Not bad huh? Wondering how this is possible. I gave you a clue earlier…

Yep, that’s right. We made ice cream from bananas. We added other stuff too but the basic recipe just calls for bananas, a freezer and some kind of blender. Here’s how we did it in two simple steps:

1. Slice up some bananas and freeze them. We also froze some roughly chopped strawberries. 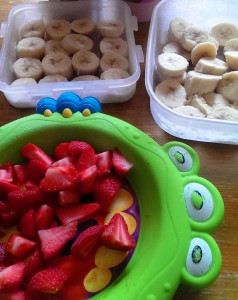 2. After 1/2 hours, pop them in a blender and turn it on. We used a simple hand held blender. It took a bit of work, but before long we had strawberry ice cream! 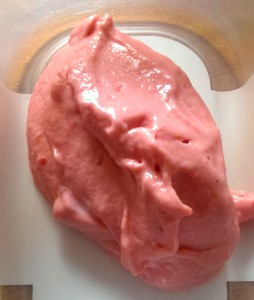 We also did a batch of chocolate ice cream – we added chocolate spread and a touch of milk to that one but it would probably work just as well with cocoa and a splash of vanilla if you want to avoid the sugar content.

We also added some caramelised coconut to ours as a topping but you could try roasted seasame seeds instead, or flaked almonds if you’re ok with nuts.

You could make a whole heap of different flavours too. We were inspired to make banana ice cream from a recent blog post over at The Boy and Me, which gives the link to the instructions we followed. Copy ours, copy some of theirs, make your own… Go bananas!