On Sunday, Mushroom and I spent the morning at the National Maritime Museum in Greenwich with Auntie L and Uncle S.

We had originally planned to go to celebrate the Chinese New Year as we’d read on the website that there were family activities and a Lion Dance happening but when we arrived it turned out we’d got our dates wrong and this is in fact taking place during the half-term week. That didn’t stop us having fun though! 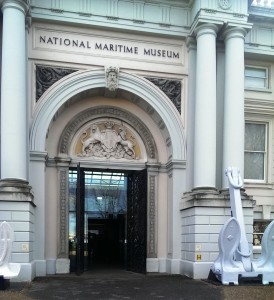 The Museum is very family friendly with a whole floor created especially for kids (The Children’s Gallery). It’s interactive and eye level is just right (well ok, a little above) for Mushroom, who especially enjoyed driving a ship to New York (it’s a simulator – but one that’s easier to walk away from if you’re feeling a little ‘seasick,’ perfect for Mushroom who usually gets scared in simulators and suffers from terrible motion sickness!) and drawing a picture of a boat to leave on the wall for posterity (or til they take it down at the end of the day).

He had the most fun though, when we all stopped to cool down with a quick drink (it’s hot in there!). Just below the kids area, on the ‘Upper Deck,’ there’s a Paul’s bakery and the floor outside is painted with a map of the world (The Great Map). Plenty of kids were simply running around letting off steam and Mushroom was no exception.

That is, until he spotted a boat making it’s way across the Atlantic. It turned out you could ‘hire’ these (it’s free, you just have to sign them out) so Auntie L did the honours and together they navigated their way across North Asia… 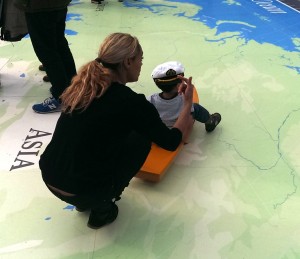 Before we headed home, Mushroom insisted on rustling up a snack in the ship’s kitchen… 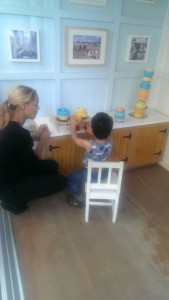 He started to get a bit possessive when other children came along though, declaring it was ‘his’ kitchen and they couldn’t ‘sit there,’ so after a couple of warnings we decided it best to distract him and we left shortly afterwards for a lovely long pub lunch.

If you’re in Greenwich then it’s one of many attractions that are well worth a visit. The only (very minor) thing I didn’t like was the donation sign in the entrance hall. It states ‘Please Donate,’ and gives a price (£3 if I remember correctly). Surely the whole point of a donation is that it’s optional and you can give as much or as little as you can afford? I mean, I know we’re lucky to get free admission to many of our museums in the UK and it’s definitely worth an admission fee (more than they suggest, to be honest) but the sign could feel a bit guilt inducing. My preference would be that it states either an admission fee, or clearly indicates that the amount listed is a suggested donation. Like I said though, it’s really quite a minor thing.

The Lion Dance takes place as part of the Chinese New Year celebrations on Saturday 15 February, when the museum will be hosting a day of workshops and performances about how trade by sea brought people and cultural celebrations from Asia to Britain. We’re in Greenwich this weekend so not sure we’ll go again next week but if we do maybe we’ll see you there!

Disclosure: This is not a paid review. The National Maritime Museum is free to visit (but there is that big donate sign) and we just wanted to share our thoughts as we had a lot of fun! Opinions are mine (Mushroom’s Mum) and Mushroom’s own. Read my full PR and disclosure policy here. 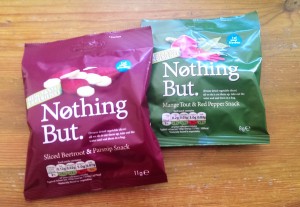 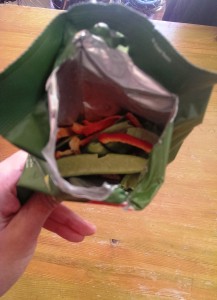 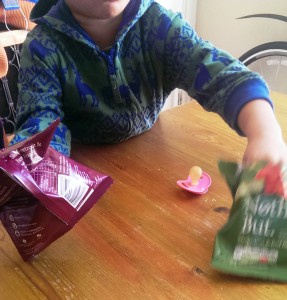 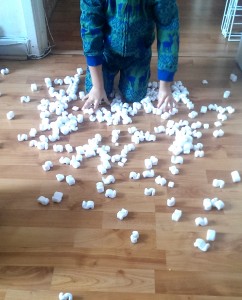 It’s about that time of year when I switch from my usual breakfast staples (Alpen most days, Kellog’s crunchy nut cornflakes if I fancy a treat) to something a little more warming (although warm Alpen tastes better than you might imagine too, go on, try it!). So, when Kellog’s got in touch and asked whether I’d like to try their new Special K multi-grain porridge… Of course I said yes! We were sent three flavours to try: Original, Red Berries and Almond & Honey. 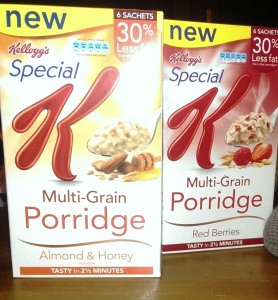 Seeing as Mushroom’s favourite (year-round) breakfast is porridge, I enlisted him to join in with the taste challenge too. It’s so easy to make that I let him do it!

Add the sachet to a bowl 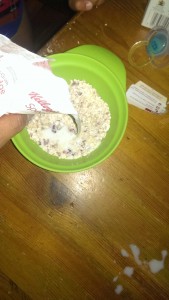 Fill the sachet with milk then add to the porridge

Stick it in the microwave for 2 minutes…

That’s it! My bowl of porridge pic was not pretty so I’ll spare you that.

We tried all the flavours over the course of a week and the winner was the red berries one, although we did also ‘customise’ the original sachet with coconut and raisins, which was lovely. I wasn’t too keen on the almond and honey one although I do like both honey and almonds! It just didn’t taste ‘right’ to me. 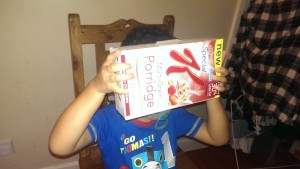 The Red Berries is a clear winner!

If you’re after a warming winter breakfast that’s quick and easy to make, then this is perfect. The individual packets also help with portion control (I tend to make far too much porridge usually, then can’t finish it all) and they are easily transportable if you prefer to eat breakfast at work!

Disclosure: We received the porridge free of charge in exchange for this review. Opinions are mine (Mushroom’s Mum) and Mushroom’s own. Read my full PR and disclosure policy here.

It’s one of those I bought on a whim after doing a google search for age appropriate books. I was curious when I saw that it was written by Spike Lee and his wife, Tanya. I assumed it would be different from his films (!) and the reviews were good so I decided to buy it. I also think it’s a good thing for Mushroom to have more books with black characters in them.

The book essentially follows a day in the life of a typical toddler but that instead of it being the usual routine of a lovely trip to the park, some jolly good fun playtime, etc., followed by hassle-free bath and bedtime in the evening, as we’ve read about in other books, this is a day for a typical toddler! This means its starts with a 3am wake-up, and is followed by the parents imploring the baby throughout the day, not to eat sand, to share her toys, not to draw on the wall… You get the picture.

At first I wasn’t sure such a book sets a good example for Mushroom, who himself is fond of a 4/5am wake-up and has been known to draw on the floor, on his face and on my clothes (not on the walls – lately – funnily enough) but he find it hilarious. He knows this baby is misbehaving and he takes great delight in it. Each time I finish reading and think he’s asleep, his little voice pipes up ‘More, more!’ I am thoroughly sick of it, and it’s repetition of ”please, baby, please, baby baby baby…’ on every page and yet…

I highly recommend this book. It will make you laugh in recognition of the challenges of bringing up a baby/toddler and kids just seem to love it. A great  stocking filler if you haven’t already finished your Christmas shopping!

Disclosure: *This is the only reason for this review. I wasn’t asked to review this book, nor have I received any payment for doing so. Read my full PR and disclosure policy here.