Fire in the sky… and on sticks! | From Mushroom’s mouth

This week I went to my first fireworks display. Mummy tried to take me last year but it rained so it was called off. I tried to hide it but I was devastated so I have been waiting ALL YEAR for this!

Mummy and Daddy picked me up from nursery and confirmed that it was not raining and we would be going to see Waltham Forest’s firework display. Yay!

We got the bus down to Walthamstow and I was so excited I kept laughing to myself. Mummy kept saying “You crazy baby.” I’m NOT a baby! But I was so happy I didn’t bother to correct her. When we finally arrived there were a lot of people waiting. A Lot. 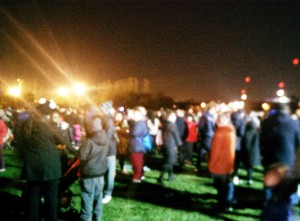 Some of them had fire on sticks! Mummy said the sticks are called ‘sparklers’ and that I’m too young to have them. She said maybe when I am big, like six. They were a bit scary anyway so I wasn’t too upset and Daddy softened the blow by getting me a lightsabre instead. 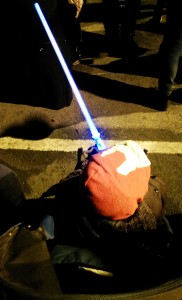 He kept telling me not to wave it around though. I mean, isn’t that kind of the point? Anyway. I was hungry so Daddy went to get us some food. Seems a lot of people had the same idea… 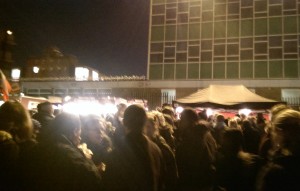 While Daddy waited in the queue, me and Mummy talked about sparklers and listened for the man saying when the display would start… Daddy just made it back in time!

It started with some words… “You’re only supposed to blow the ______ doors off!” A lot of people laughed at this and I kind of wanted to know what word  ______ was but was too busy watching the sky light up to ask. 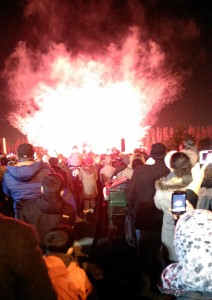 They played music from the movies and Mummy and Daddy kept laughing at some things but I’m not sure what was funny… I didn’t know some of the songs but liked ‘Ghostbusters’ and ‘Girls just wanna have fun.’ – I know that one because my Auntie sings it on youtube! And when they played Let It Go I sang along: “The cold never bothered me anyway.” Actually, the cold did bother me a bit so I was glad Mummy made me wear my iron man onesie over my clothes! 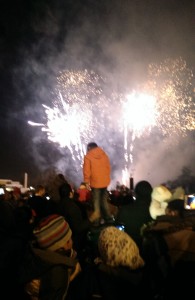 This kid had The. Best. Seat.

The show ended with music I liked and Mummy said it was from Star Wars. I wanted to watch it all over again but I was very tired by then (and my ears hurt a bit. Fireworks are very noisy) and fell asleep as soon as I got back in my buggy. I can’t wait til next year!

I am linking this post up to Coombe Mill‘s Country Kids . Click on the image below to find out more.

4 thoughts on “Fire in the sky… and on sticks! | From Mushroom’s mouth”