Mushroom had his first piece of homework from school recently.

I won’t go into my thoughts on homework for four-year olds here, that’s probably for another post! But that’s my stuff. He seems to quite like having homework. And to be fair, it’s not dissimilar to stuff we would do anyway as part of our playtime. 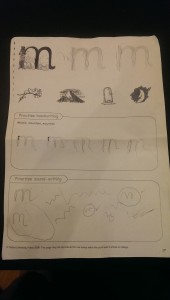 All of his homework has been to practise writing his letters. His first assignment was the letter ‘M’ (coincidence?). Only we’re not allowed to call it that. We have to say “now let’s practice writing Mmmm”, which feels really weird to me! Anyway, he tried very hard and was so proud to hand in his first piece of work, which made it to his classroom’s Wow! board. He was very pleased (as was I!) but I tried not to make too much of this as I don’t want him to be upset when a piece of work doesn’t make it to this board!

Anyway… We have been told to practise the sounds of the letters as much as possible so we talked about all the things that begin with ‘Mmmm’ (still feels weird). Mushroom said “Maisie and the mountains” first, as that is how he’s been taught to write it (see Read Write Inc.). Then we talked about the moon, magic and mandalas! Ok, so I brought up the mandalas. He rolled the word around his mouth a few times and got very excited, even before I’d explained what a mandala is (I agree though, that it is a fabulous word).

So, we got whatever natural things we could find around the house for our first attempt: 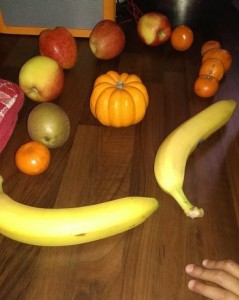 And created this together! 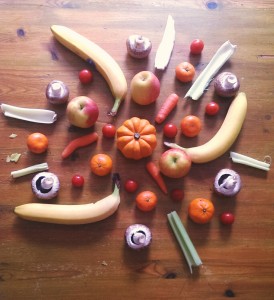 Then I left Mushroom alone for ten minutes and when I returned, he proudly told me “Mummy I made a mandala! It’s so awesome.” It really is. 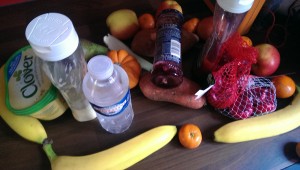 I’m not sure the mini babybels should be in there. Or the salad cream. Or… But I didn’t have the heart to tell him!

I expect we’ll be making many more mandalas soon enough!

If you’re wondering why the obsession with mandalas, well I’ve always enjoyed making them but haven’t done for a while, until Pippa invited the Story of Mum community to share theirs! If you fancy getting creative with nature why not make one yourself and head over to add it to the gallery?