Slipping in to spring

Spring is almost my favourite time of year. If pushed, I would say that I love summer – the heat of the summer months (when we get it!) is what swings it for me but there’s something special about spring. I feel happy, I’m more creative, I write more poems… It’s just generally the best time of year for me.

So it won’t surprise you to learn that Easter is my favourite holiday. I associate it with the new life, and the start of something more to come.

To celebrate the start of our favourite season (it’s Mushroom’s too until he tells me otherwise!) we have been making the most of the lovely weather this week.

We had friends round on Thursday and spent the morning playing over on the big pirate ship that some of you might have seen before. We stopped for lunch and ate pizza and cadbury’s creme egg chocolate brownies. Mine didn’t look as good as Jenny’s at Mummy Mishaps (which is where I got the recipe) so I didn’t take any photos.

After lunch we headed to Brook’s Farm – our local city farm. We were hoping to see come lambs and ‘baby chickees’, as Mushroom calls them but the only babies there this week were goats. 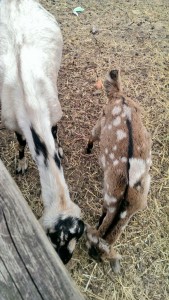 As they saw us coming they ran to their mother to nurse and Mushroom said ‘Look they are drinking Mummy milk like baby Chickpea!’* He was very excited and asked whether all animals have Mummy milk and if mine would ever come back. Erm… That was a tricky one as at the moment we don’t plan to have any more kids but I explained that the milk comes with the babies and goes when they stop drinking it (and he definitely doesn’t see himself as a baby any more!).

The afternoon was spent eating ice cream and playing in the brilliant adventure playground outside the farm.

On Saturday we met up with my sister and her boyfriend, who had been instructed not to buy Mushroom sweets for Easter… So he got George Pig (who now goes everywhere with us) and a travel play doh set… He was made up with these but much more interested in getting to the ‘Special park’ (the Olympic park in Stratford) where he spent an hour playing at the Tumbling Bay adventure playground before we headed home. 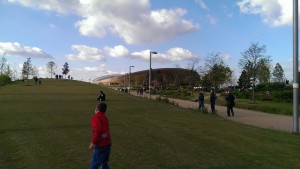 The view from the playground! I couldn’t use any of the photos I took in the end… I will take more next time!

Sunday the weather was a bit disappointing but we spent the morning playing with his new travel play doh, making ‘birthday cakes,’ and we went to a family christening in the afternoon. He was a nightmare in the church but luckily he wasn’t the only toddler who wouldn’t sit still for 2 minutes and the service was short! It was raining when we got to the reception but when it cleared Mushroom was so excited about playing outside in the dark that he stayed in the little playground with the big kids from when we got there (about 6pm) til we left (after 11)! 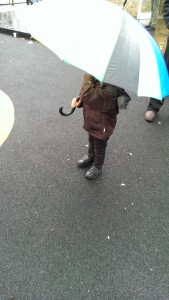 What did you do with your long weekend?

It might be a little late, but I am linking up to Coombe Mill‘s Country Kids  with this post. Click on the image below to find out more.

*Baby Chickpea is Peanut’s little brother (find out more about Peanut’s Daddy in his Daddy Plus interview!)

4 thoughts on “Slipping in to spring”