Hello you lucky people. This is Mushroom. Someone told Mummy that when I write it’s way more engaging than when she does. Well of course it is. So She’s giving me a whole section of her blog to share my thoughts with you. See, you lucky, lucky people.

So, seeing as it’s coming up to Christmas I thought I’d share my thoughts on the festive season with you. The short version is – I love it. I get more chocolate than usual and there are pretty shiny things and twinkly lights everywhere. Lovely. I really enjoyed putting up the Christmas tree (with a Twinkle Twinkle star on the top!) and I love turning on the lights every day as soon as it gets dark. Apparently on ‘Christmas day’ it will have lots of presents under it for me. I like the idea of getting lots of presents. It’s a bit confusing though, ’cause I’ve been getting some when I see my friends and Daddy keeps saying I have to wait until Christmas day to open them! Firstly, I thought it was Christmas now? And secondly, wait? Why wait? I’m not too good at that. I even say sorry ten seconds into a time out in the hope of getting out of doing a full minute (Mummy figured out quickly that a minute’s enough for me). Speaking of Mummy….

She’s a bit of a pushover when it comes to presents. I’ve opened three so far under her watch. Ha! One of them was when we went to a local park to see Santa. He’d just left, apparently, but his elves took pity on me and gave me a gift anyway. I like the elves. It was two enormous pencils. I broke them both by the evening. Mummy said not to worry as it was an ‘accident.’ I’m gonna start using that.

The most recent gift came when I actually met Santa. Like I said, he was a bit scary. First of all, I’ve been told he’s ‘Father Christmas,’ so I didn’t get who this ‘Santa’ guy was until Mummy explained it’s a bit like she’s Mummy but her friends call her Rachael. But I’m not Santa’s mate. Are you? Not even sure the elves are, I mean, they work for him don’t they? How matey can you be with your boss, really? Anyway. We went to Westfield (Stratford) to see him at his house. Before we saw him, we got to play in a big room with lots of pretend sweeties.  I stacked sweetie towers and told anyone who came near me that they were ‘mine!’ Mummy said it was rude. Whatever. I’d worked hard to stack those towers and wasn’t letting anyone knock them down! She tried to distract me by showing me a sleigh. I made all the right noises and then she wanted me to get on it. I don’t think so! What if it flew off to the North Pole? I made a big fuss, screaming ‘I not flying!’ and eventually she gave up. 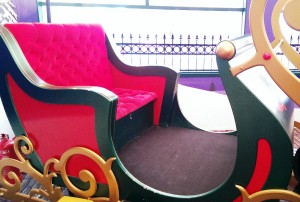 Would you feel safe if this took off? No? Didn’t think so.

Then, we went through carpet covered doors, past some more sweeties (normal sized one this time) we weren’t allowed to eat (and the point of that is…? Anyone?), into a room with an enormous TV. We had to wear glasses, which I didn’t like so much but didn’t complain. Then we watched a film that started off being really scary! I shouted to Mummy that I wanted to go back and play but she ignored me. Then pictures of the children I’d seen in the other room appeared in the film, and eventually one of me! I liked that. The rest of the film was ok but there wasn’t enough of me in it if you ask me (no-one did).

Afterwards, we went to another room where I finally came face to face with the big man. He was enormous, and a bit scary. When it was my turn to talk to him I sat really close to Mummy. He asked me my age and some other stuff. I kept my mouth shut. Too many questions, old man! Eventually, he asked what I wanted for Christmas. I was giving it some thought but Mummy seemed a bit on edge, eyeing up the other parents. Did she not realise how important this was? She made a few suggestions and eventually she came up with the goods. She looked relieved when I told Father Christmas what I wanted. Can’t think why, it’s nothing to do with her! Anyway, I was ready to go after that and he gave me a present before I left. Result! I had to wait til Daddy got home to open it and I thought showed great restraint. Daddy wanted me to wait even longer but Mummy told him she’d already promised me (see? Pushover) so I was allowed. Besides, he got a gift too – a photo of me and Father Christmas! What more could he want?

So, parent bloggers…. How do you feel about Christmas? Do you prefer giving or receiving presents? And what about the kids? Do they like Father Christmas (Santa, if you’re matey with him – if you are, put in a good word for me would you)? Or do they find him a bit scary too?

Before I forget, if you do prefer giving you can add me to your list. I’ve been a good boy, honest.