A wet and windy week

The weather has been terrible lately and Mushroom and I have both had throat infections so a lot of time has been spent indoors, either here at home or at his Auntie’s house (I made it to work but Mushroom was off nursery) so when we both started to feel a little better, we made a point of getting outside!

Yesterday, we headed to Coronation Gardens and just ran around the bandstand, with Mushroom ‘making footprints,’ and laughing as the wind ‘pushed me running Mummy!’ Then the wind picked up and blew his buggy over so we decided to head home, with Mushroom commenting. ‘Thunder coming. Like Ben and Holly.’ He was right, a storm was brewing and we just missed being caught out in it! 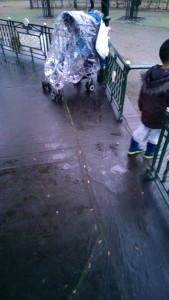 Making footprints on the bandstand

Today we spotted a sliver of sunshine after lunch so ran out to the local park to run around and climb the climbing frame. 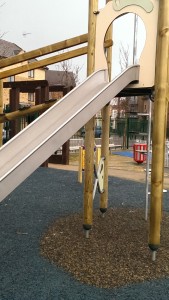 Mushroom loves the slide and had a few goes before it started pouring with rain! I hadn’t brought his waterproofs but he seemed ok at first so I said nothing… 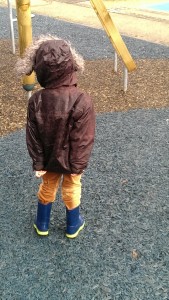 Then he complained about having wet trousers and declared that it felt ‘yucky.’ So I asked him what we should do and he said ‘Go back home,’ and sighed heavily. Then suddenly the sky cleared again and he shouted ‘Come on, let’s run!’ 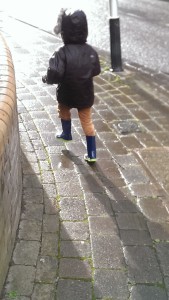 By the time we’d changed his trousers it was pouring down (again!) and he said he was too tired to go back out (he was, he fell asleep early today!) but I’m glad we made it out, if only for a short time. To find out who else braved the weather (and worse than rain!), check out Coombe Mill’s blog by clicking on the image below.

7 thoughts on “A wet and windy week”