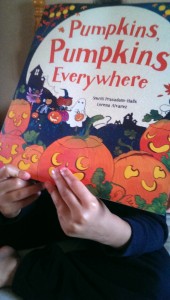 Actually they’re not, which is a bit of a pain as Mushroom really wants us to carve a pumpkin this year, thanks to our latest gift from Parragon Books.

He was really excited by this book, asking “is it scary?” as he traced his finger over the glittery moon. I suggested we take a closer look…

It’s a simple rhyming book, with lovely illustrations of children (with all those pumpkins!) getting ready for a Halloween parade. Mushroom and I don’t really ‘do’ halloween at home, other than giving sweets to any trick or treaters who turn up (not many!) and a one-off themed party he had at nursery once but he does like the idea of pumpkin lanterns, having spotted a few themed plastic torches in toy shops lately. He actually wasn’t that interested in the story this time, preferring to look at the illustrations and come up with his own! So when  said “Pumpkin happy,” he responded with “Yes, because he has all the sweeties!” and “Pumpkin fly” was met with “That boy might drop him!” He asked if the pumpkins were alive and I explained that they were lanterns that people make by carving pumpkins…. And pointed out the pumpkins carved into different shapes, like a spider and a cat, at the end of the book. So now of course he wants us to carve one this halloween!

Once Mushroom has an art project idea in mind he doesn’t forget it so I had better keep my eyes open for at least one pumpkin, and hope he doesn’t expect me to carve spiderman into it! If we manage to find a pumpkin and carve something that doesn’t look too terrible, I’ll come back here next month and post it below.

We did indeed find a pumpkin (of course we did!) and had a go at carving it: 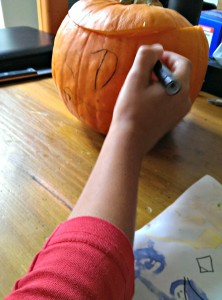