So, in my last post I suggested that we might head back to the Olympic Park to (finally) go up the Orbit to see Santa this year… and we did! Here’s a photo diary of our day… Starting with the promised orbital baubles!

Views from the bottom top and middle of the tower – where we saw Father Christmas (Mushroom’s still a bit wary. You should have seen the side eye he gave him!) and his very patient reindeer: 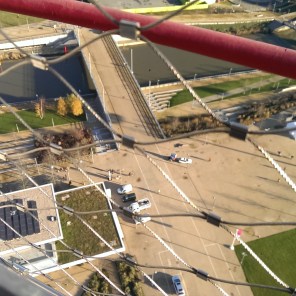 After lunch, we went for a walk where we met some very interesting characters from Fairytales after Dark (unfortunately we left it too late to get tickets for this)! There were giant birds, arctic explorers, trolls, a camel-riding monkey and a moving piano! After the travelling mini show, we headed across the bridge to the soundtrack of a stunnning gospel choir, where there was a craft activity as part of The Floating Cinema. Mushroom made a boat, which he said was his favourite activity of the whole day!

Finally, after a quick go on the trampolines in the mini fairground, Mushroom and I headed home via La Petite Robe Rose where we warmed up with some chocolat chaud before heading home. If you want to find out more about the activities at the Park throughout the year, head over to the website. Or if twitter’s your thing, the twitter handle is @noordinarypark – and it certainly isn’t!

Disclosure: We are not in any way affiliated with the Olympic Park (we will let you know if this changes!) but just love it (if you hadn’t guessed). We paid for the visit to the Orbit and all the other activities mentioned were free.